If you are new to golf and finding it hard to wrap your head around the terminology, you are not alone. Even golfers who have been playing the game for many months can still find their vocabulary severely lacking. Our handy glossary breaks down all the must know golf terminology you need in your repertoire.

Golf club terms are a good place to start when building your golfing glossary. Below are the 7 main varieties of club every golfer will ultimately encounter.

The driver is the longest of all the golf clubs, with a sizeable head that dwarves what you might find on other clubs. Drivers are often used for teeing off at the beginning of a game. They are also popular at driving ranges. The main application for drivers is to ensure the ball covers the greatest distance and gets to the green with as few strikes as possible. However, they are best used when striking directly from a tee.

Although fairway woods fall within the broader woods category of clubs, they are often considered as their own entity. Fairway woods have a relatively small head and shorter shaft when compared to other club types like the driver. Visually, they are fairly similar to conventional woods, with a large head and a rounded shape. They are often turned to when making the first strike, particularly when playing on short par holes. They can however be used for the second stroke when playing on holes with a higher par.

Otherwise known as rescue clubs or utility clubs, hybrids are the newest of all the club categories. Hybrids serve as an intermediary club choice between irons and woods, bringing together the strengths of both club varieties. They have the large head size you would find with clubs, but also boast the shorter shaft of irons. This makes hybrids easier to hit than conventional irons, but provides you with a more forgiving club that is easier to handle. They are becoming a popular alternative to shorter irons.

Irons are a popular choice of distance club. They allow you to hit the ball across considerable distances, falling short of fairway woods and hybrid clubs, but offering better distances than wedges. Most golf bags will include multiple irons, numbering from the 3-iron all the way to the 9-iron. These clubs are used to get the ball to the green and can be used for the first strike on holes with low pars. They can also be used on approach shots when playing on higher par holes.

A putter is almost always the last club a golfer will use prior to getting the ball in the hole. A putter includes a flat club face that will allow you to roll the ball across the green, rather than lift it into the air. Although putters are generally shorter than other clubs, newer putters tend to include longer shafts. There are numerous putter varieties available, including blade and mallet putters.

If you are looking to get the ball to the green from a shorter distance, you will almost certainly turn to a wedge. This type of club has a shorter shaft length than clubs such as irons, with a loftier face angle. This allows for struck balls to enjoy higher trajectories, but ball flight is often shorter. This provides you with exceptional landing performance. Golf wedges come in a variety of types, including pitching wedges, sand wedges, lob wedges and gap wedges.

This category of club encompasses both fairway woods and drivers. Woods generally have longer shafts and larger club heads with a rounder profile. These clubs are engineered to send the balls across impressive distances. They are often used when teeing off or on approach shots when playing on holes with higher pars.

Mastering golfing techniques is one thing, but getting to grips with scoring terminology is a whole other ballgame. Understanding scoring terminology can be difficult, but once you have polished up on the basics, you should have no trouble keeping track of your scores.

This is the holy grail for any golfer. As you might deduce from the name, an ace, or a hole-in-one, involves the golfer hitting the golf ball directly from the tee to the hole in a single stroke. In most situations, a hole-in-one is only credible if it has been witnessed by at least one other golfer. In order to certify the hole-in-one, the successful golfer must have their scorecard signed by a witness to their feat. Traditionally, the lucky ball is set aside and kept as a memento of their success.

A bogey refers to when a golfer falls just short of the standard score of any given hole. Basically, a bogey is when a golfer uses a single stroke more than the par of a particular hole on a golf course. A bogey may also be referred to as being one over par.

Scoring a condor is an unlikely result in golf. A condor refers to when a golfer uses four strokes below the standard of any given hole. Unless the par number of a hole is significantly high, a golfer is very unlikely to achieve a condor. Any golfer who claims to have achieved a condor on a hole with a low par number should be viewed with suspicion.

An eagle is a desirable result in the game of golf. An eagle is achieved when a player manages to complete a hole with two fewer strokes than the standard for a particular hole. Another way to refer to an eagle is two below par.

Although not a classic scoring term, a handicap is regularly used by golfers to determine the number of strokes they are playing over par. Rather than refer to a specific hole, a handicap is an average number that combines all the strokes played above par throughout an entire game of golf. They are considered particularly important to golfers as they give a general idea of golfing performance.

For average golfers and beginners, achieving a par is a good result. A par, otherwise known as an even, refers to when a golfer completes a hole that matches the standard par number of a particular hole. A par is recorded with an ‘E’ on a golfing scorecard.

Unless you intend to play purely at the driving range or at home in a simulator, you will want to get yourself familiarised with various golf course terminology.

This refers to any sand bunkers encountered on the course. You want to avoid these at all costs as getting out of one can severely affect your score and bring up your handicap when averaged across an entire round of golf.

This is a more general term that refers to any problematic area found on a golf course that is made up of a concave type terrain. Bunkers are often filled with sand or a similar substance. They are intentional hazards that have been incorporated into the design of a golf course to make life more difficult for golfers.

This refers to any build-up of water on a golf course that is not present as part of an intentional hazard. Excessive rainfall can result in a casual water scenario. In most situations, a golfer may be allowed to move their ball slightly to compensate for a casual water hazard, without any penalty applied to their scorecard.

This is the part of a hole that you want to remain on during play. The fairway is the smooth stretch of grassy terrain that connects the tee box with the green at the end of a hole. Fairway grass is usually well maintained, providing you with optimal conditions when it comes to making contact with the ball and optimal roll.

This is the highly visible piece of material that is attached to a pole erected in the hole or cup on the green of a hole. The flag provides you with a clear indicator of your target, even when teeing off or approaching the green from a distance.

The green is the target area of a golf hole. Greens are grassy areas that have been kept short and smooth, allowing you to putt the ball with relative ease. Many greens will also include some sloping terrain that can create an additional challenge at the final hurdle.

This general term refers to any obstacle on a golf course that has been included to potentially impact your score. It may refer to strategically positioned bunkers or bodies of water. You want to avoid hazards at all times.

The target for the golf ball. Holes are always positioned within greens and are clearly marked with a flag so you can line up your shots and swing in their direction, even from a considerable distance.

This refers to the area that borders the relatively smooth fairway section. The rough is usually populated with tall grasses that can be difficult to launch balls from if you land away from the fairway.

Still finding it hard to understand what fellow golfers are talking about? You probably need to brush up on a few gameplay terms to ensure no room for confusion when teeing off and tearing toward the green.

This refers to the shot golfers take from the fairway section in the direction of the green. It is often the second or third shot a golfer will take.

If you are playing with one or more golfers, the away is the term used to refer to the outlying ball in relation to the hole. In most games of golf, those in possession of the away ball are usually the ones who go first.

You will face a bank shot if you have fallen foul of a sloping terrain that has been included in the design of a golf course to impede your ball speed or trajectory.

This refers to the initial shot each golfer makes from the tee box.

Simply put, this refers to a poor shot, no matter what part of the course you are playing from.

If you hear ‘Fore!’ uttered on the golf course, heed this as a warning that a ball is flying in your direction.

If you are lucky enough to be playing with forgiving fellow players, you may find yourself being able to play a Mulligan. A Mulligan is essentially a second try at a shot, without you having to suffer a penalty on your scorecard.

This refers to when a golfer utilises a club that is too powerful than required. For example, when a golfer uses a driver when a wedge will do fine, they may be accused of over-clubbing.

This refers to any shot taken on the green with any type of putter club.

The starting point of any golf hole when you take your initial shot.

This identifies the midpoint of any golf round. 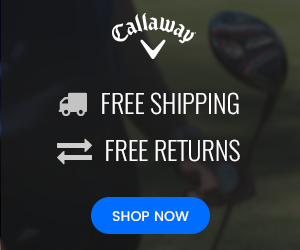 WordGolfshop.com is a participant in the Amazon Services LLC Associates Program, an affiliate advertising program designed to provide a means for sites to earn advertising fees by advertising and linking to Amazon.com

WordGolfShop.com is also a participant in other 3rd Party Affiliate programs whereby we may earn a commission on qualifying sales.